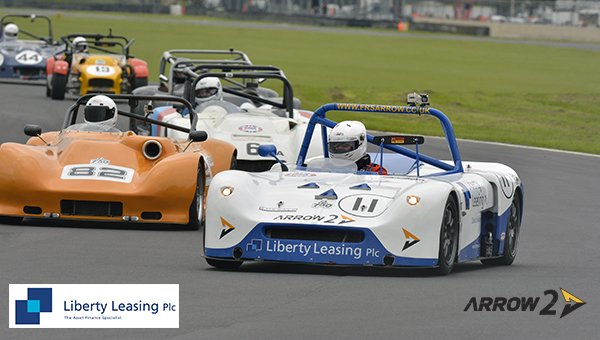 For those of you who have been watching the Arrow through 2014 you will know that the 1600cc Zetec SE powered car was able to out-perform many on the Sport Specials grid but it did not have the outright power to win races . For 2015 the decision was taken to develop the design to use the 2000cc Duratec engine that is defined for class A of the championship. This has not been an easy process and below we share some of the details of our season up to our EUREKA moment at Castle Combe last weekend where our hard work was rewarded.

The Zetec SE produced 110HP at the wheels so we were dissappointed that the first run with the Duratec.2.0 showed only 127HP. All the obvious checks on leak down, compression, inlet filters, timing and mixture showed OK so initially we thought that the exhaust was the constraint. A new larger bore exhaust was made but we still only showed 130HP. This figure should be nearer 160HP. One of the unusual features of the Arrow2 design is that the engine leans forward  at 20 deg to improve weight balance. Maybe the consequent oil level was dragging on the crank. An improved sump was developed that needed a lot of thought but again the reduction in oil level only produced a minor improvement. Next change was a completely new engine in case there was an internal fault in the first.

Finally at Castle Combe the new engine showed no improvement and I admitted I was stumped. I started asking fellow racers what they could think of to explain our situation. There were many suggestions and it was agreed that it had to be something stupid. Finally our EUREKA moment was an inspection of the plugs which showed a weak mixture on #1. Although the overall exhaust gas reading was right it seemed that the injector on #1 was delivering less fuel than the others. A change of injectors made the world of difference to the performance and Arrow2 led class A in both races.